The school is situated in Hampstead Garden Suburb, at the southern end of the London Borough of Barnet. We are a three form entry co-educational community junior school for children between the ages of 7-11 years. The school was originally opened in 1913. Part of the building was rebuilt in 1960 to replace damage caused during 1939-45 War. 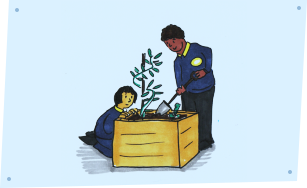